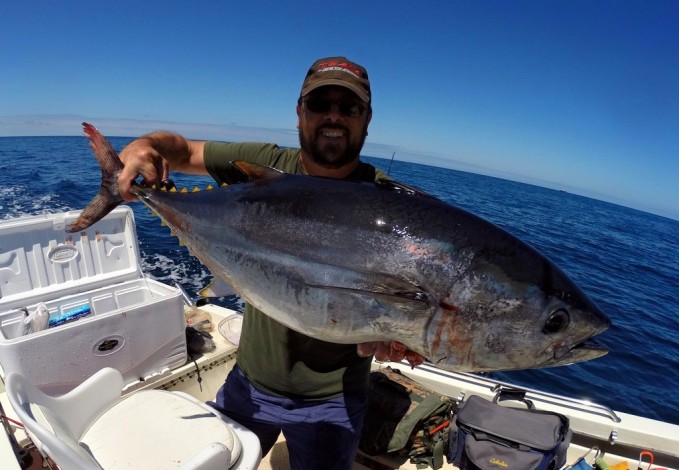 WASHINGTON, D.C. — A petition to declare Pacific bluefin tuna as a threatened or endangered species could be successful, the National Oceanic and Atmospheric Administration (NOAA) announced in October.

The federal agency is seeking scientific and commercial information about Pacific bluefin tuna through Dec. 12 to determine whether an endangered species designation is warranted.

NOAA was petitioned in June by the Center for Biological Diversity (CBD) and 13 others to have Pacific bluefin tuna listed as a threatened or endangered species under the Endangered Species Act, or ESA.

“We find that the petition presents substantial scientific information indicating the petitioned action may be warranted,” NOAA staff stated in its 90-day finding of the CBD petition.

The finding was published Oct. 11 on Federal Register.

“We will conduct a status review of the Pacific bluefin tuna to determine whether the petitioned action is warranted. To ensure that the status review is comprehensive, we are soliciting scientific and commercial information pertaining to this species,” the finding continued.

NOAA is specifically seeking detailed information of the species’ abundance, productivity and habitat conditions as well as what impact environmental phenomena such as climate change would have on the survival or extinction of Pacific bluefin tuna.

Federal officials are also seeking information of the species’ distribution and population spatial structure, its observable physical and genetic behaviors and whether adequate regulatory mechanisms and protections are in place to promote conservation of Pacific bluefin tuna biomass.

Information about recreational or commercial bycatch/targeted harvest and whether efforts to protect/restore Pacific bluefin tuna and its habitats are implemented will be sought as well.

“We are interested in any information concerning protective efforts that have not yet been fully implemented or demonstrated effectiveness,” NOAA officials stated in its 90-day finding.

“Pacific bluefin tuna are severely overfished, and overfishing continues, making extinction a very real risk,” CBD staff stated in its June 20 petition. “According to the 2016 stock assessment by the International Scientific Committee for Tuna and Tuna-Like Species in the North Pacific Ocean (ISC), decades of overfishing have left the population at just 2.6 percent of its unfished size.”

The petition added Pacific bluefin tuna must be conserved due to the species’ value in the marine ecosystem as an apex predator, according to the CBD petition. CBD alleged the United States “has not taken adequate steps to prevent overfishing and to rebuild Pacific bluefin tuna.”

Bycatch rates of Pacific bluefin tuna have been in decline since 1935, the CBD petition continued, with fishing being the primary culprit.

“Fishing is the primary threat to the survival of Pacific bluefin tuna. Basin-wide landings of Pacific bluefin tuna have declined substantially since they peaked in 1935,” the CBD petition stated. “The fact that catch has continued to decline despite increases in fishing efforts shows that the bluefin population has crashed.”

“Nearly 98 percent of all Pacific bluefin tuna landed are juveniles caught primarily in nursery grounds near Japan or off the coast of California and Mexico before they have had a chance to spawn,” the petition explained. “[The species’] reproduction is currently supported by just a few adult age classes that will soon disappear due to old age.”

Pacific bluefin tuna are pelagic, highly migratory and slow growing; the species is known to swim across the Pacific Ocean basin and maintain a body temperature higher than surrounding waters. The average lifespan of a Pacific bluefin tuna is 20 years; sexual maturity is reached between ages 3 and 5.