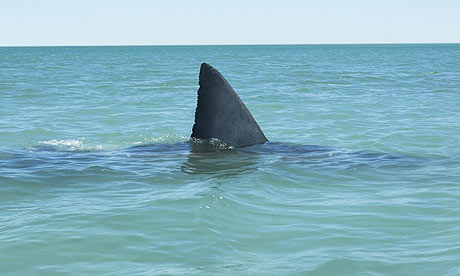 A great white shark at the end of a pier fisherman’s line attacked a swimmer 300 yards off Manhattan Beach on Saturday morning, according to Manhattan Beach Patch and Associated Press.

The unnamed victim, a middle-aged man who was part of a group of long-distance swimmers in training, was bitten on the upper right torso, and taken to a hospital conscious and breathing on his own, Los Angeles County Fire Deparment spokesman Rick Flores told AP. The attack during a busy July 4th holiday weekend prompted officials to temporarily close a two-mile stretch of water one mile to each side of the Manhattan Beach Pier.

A sheriff’s helicopter crew eventually spotted the shark about 200 feet north of the pier. “The deputies [in the copter] directed a lifeguard boat and a Redondo Beach Harbor Patrol boat to the shark,” L.A. Sheriff’s Department said in a statement, according to Manhattan Patch. “A paddle boarder was directed away from the shark by the boat crews. After approximately 30 minutes, the boats were able to coax the shark out to deeper water and away from the pier.” A fisherman on the Manhattan Beach Pier had been fighting the 7-foot great white shark for about 45 minutes when the shark attacked the swimmer, prompting the fisherman to cut the line. Witness Aram Ozen, who was surfing near the pier, told the Los Angeles Times that people began screaming “White, white!,” referring to the great white shark. “It was a scary scream,” Ozen said. “It was kind of freaky. There [were] a lot of people screaming back to shore.” A nearby surfer put the victim on his surfboard and paddled him to shore with the help of L.A. County lifeguards.

Paramedics immediately began treating the man for puncture wounds described as moderate injuries. “I was there,” Scott Valor commented on Manhattan Beach Patch. “A fisherman who regularly tries to catch sharks had it on the line for 45 minutes…and the shark was panicking. The swimmer just happened to be in the wrong place at the wrong time.” The incident, which occurred just before 9:30 a.m., comes on the heels of several shark sightings in the same area. In May, standup paddleboarders caught an encounter with a great white shark on video. The same week a surfer encountered a great white shark.

Last year, a shark sighting prompted authorities to close the beach. Flores told AP that lifeguards patrolled in boats to ensure the water was clear of sharks.