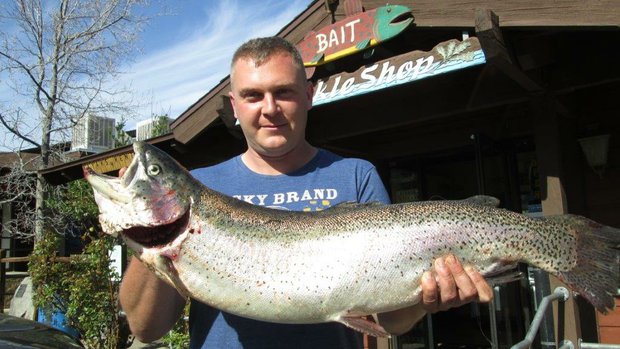 CUYAMACA — Ranger Jay Blaylock has been running Lake Cuyamaca’s stocking program this year and his big change in stocking practices has led to a new lake record trout caught at the mountain fishery.

Lukasz Szcedanek landed a 17-pound, 8-ounce rainbow trout on Sunday to smash the lake record of 15-4. He used a ball of inflated night crawlers and fished off Heron Point (next to the big wooden Bear).

Supervising ranger Butch Paddock said the big rainbow was part of the latest trout plant from Mt. Lassen Hatchery and had been in the lake less than a week.

“It was, by far, the largest trout we received from Mt. Lassen Hatchery,” Paddock said. “It was, by far, the largest fish planted at Lake Cuyamaca in recent history. They were planted on St. Patrick’s Day (Tuesday) with lots of on-lookers at the boat launch ramp. We’re happy to say that several 10-pounders have also come out, and there might be an even larger ‘bow in the water.”

Blaylock said last week that he changed the timing and regular schedule of planting trophy trout. Instead of getting all the big brood stock late in the stocking year, he spread the trophy fish out by including some in every stocking at the lake. That has led to trophy trout being caught regularly at Lake Cuyamaca. An angler now has a chance to catch one of the huge rainbows every time out.