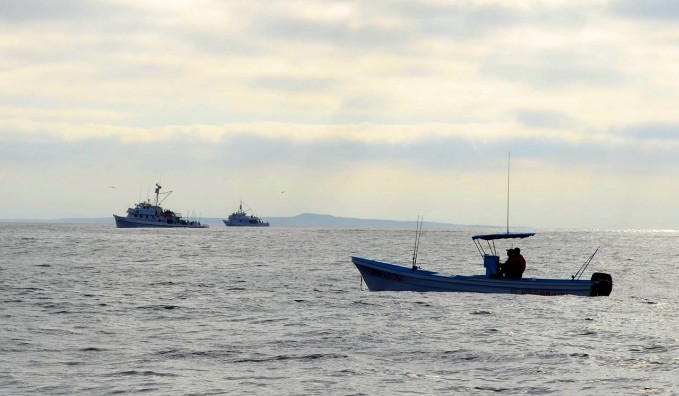 Well, fishing sometimes brings out the worst in people and I’ve had my share of run ins with the local sport fishing fleet, but this conflict could seriously have implications on sport fishing in Mexico.

There was a face to face conflict today between charters from the San Diego sportfishing fleet and several of the local San Quintin sportfishing operators, mostly on pangas. Several of the San Diego charters had been anchored on a spot referred to locally as “240″ for a few days, making it extremely difficult for the locals to get in on any of the action. The 240 is a very popular location for local sportfishing charters to take their customers – mostly tourists – to virtually “guarantee” a successful day of fishing.

Immediately some of the local boats retaliated, swarming the visiting charter and threatening to cut their anchor line. At that point the San Diego captains did get on their radios finally and attempted to negotiate an arrangement where all could fish together somehow, but it was too late.

A local San Quintin sportfishing owner, Kelly Catian got on the radio with the San Diego captains and explained that in spite of them having all their permits to fish here, they had failed to observe a couple of key stipulations of those permits which include maintaining a minimum distance of 600 meters from local commercial fishing operations and avoiding any conflicts with the local fishing operators. They had violated both provisions and it was explained to them that they were simply no longer welcome.

By that time the radio chatter was extremely hot among the local fishermen and a few were calling on their radios for more pangas in the area to come over in support. The situation was escalating quickly and at that point most of the San Diego charters made the decision that it was indeed better to leave the area and help diffuse the situation.

One of the San Diego charters however, the INTREPID, refused to leave with them and a strong war of words ensued; more obscene gestures were exchanged between the anglers and crew of the INTREPID and the local pangas and the situation became extremely tense. At that point the captain of the INTREPID finally came out on the deck, apologized for what had occurred, pulled anchor and left the area.

The local San Quintin sportfishing operators all plan to file complaints with both state and federal officials over what they see as a clear violation of the rules and generally accepted industry guidelines.

Captain Juan Cook of the SLAPTAIL explained that these longe range San Diego fishing charters can basically fish wherever they want, many with a range of over 1000 miles. When several of them come in on a local “hot spot” like this, anchor for days with hundreds of anglers onboard, they basically clean out an area of all the game fish. They cause serious harm to the local panga operators who only hope to catch maybe 5 or 6 good fish for the day to be able to keep their customers happy and put food on the table back home. None of these San Diego charters contribute any economic benefit whatsoever to the local San Quintin economy and are widely viewed as a cancer to the local fishing industry.