Spawning Razorback Suckers Are Back 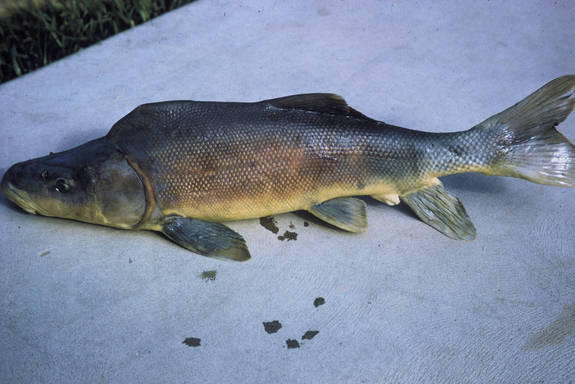 After returning to the lower Colorado River in 2012 after a 22-year absence, the endangered razorback sucker fish is now spawning in Grand Canyon National Park, scientists announced today (June 18).

Biologists discovered larval razorback suckers in April and May at nine spots along the iconic Colorado River, which is home to several critically endangered fish species found nowhere else in the world.

“Razorback suckers continue to surprise us in Grand Canyon [National Park]— first with the discovery of adults after 20 years of absence, and now with spawning within the park,” Brian Healy, fisheries program manager for the national park, said in a statement. “We’re all hoping to see evidence that these larval fish survive to adulthood in the coming years.”

The razorback sucker was one of the biggest suckers swimming in the Colorado River before the Glen Canyon Dam was built in the 1960s. Growing up to 3 feet (1 meter) long, with a distinctive bony keel on its back, the fish disappeared from the stretch of river flowing through the Grand Canyon in 1990. The dam chilled the river and starved it of sediment, changing the habitat for native species. The introduction of non-native fish species also hurt locals such as the razorback and humpback chub.

The razorback sucker was placed on the national endangered species list in 1991 and Colorado’s endangered species list in 1979.
Until now, the only remaining wild razorback population was found in Lake Mead National Recreation Area, according to the U.S. Department of the Interior. An ongoing recovery program stocked rivers in Colorado and Utah with young, hatchery-raised razorbacks.
Razorback suckers being released into Havasu National Wildlife Refuge’s Beal Lake.

The discovery of an adult fish in the Grand Canyon in 2012 sparked hope that the razorbacks could return to the lower Colorado River.
This March, biologists released nine adult razorbacks within Grand Canyon National Park, downstream of Lava Falls (river mile 180). Each fish carried a sonic tag, and in April, the scientists located several of the fish, as well as tagged fish that had migrated upstream from Lake Mead.
“This exciting news suggests that Grand Canyon is becoming a significant basin-wide haven for the endangered fishes in the Colorado River,” Lesley Fitzpatrick, a biologist for the U.S. Fish and Wildlife Service, said in a statement.

While scientists don’t know why the razorback has returned, in the past two years, river conditions have become more favorable for spawning. Beaches and sandbars have reappeared along the Colorado River since the U.S. Department of the Interior began a series of massive floods in 2012 that are designed to rebuild habitat along the sediment-starved river