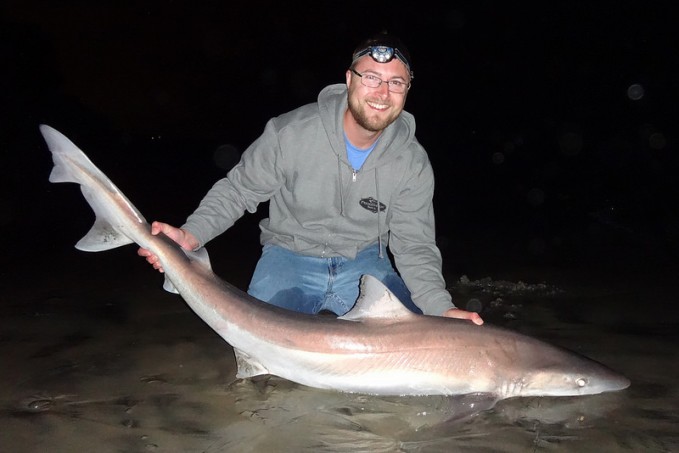 The Grinner Gathering ended up living up to it’s name after most had packed it in. It was a really fun time getting to meet and fish with all the familiar names on the website from over the years.

Many of us met up at the Tidewater Tavern prior to the event to get some beer and grub in us and catch up prior to the actual fishing part.  It was a blast and just as the sun was getting low in the sky, we headed down to the beach.  There was a good number of people who showed up and everyone staked out their spots.  The surf was low and the beach looked clean…. the issue was the current was ripping and the Soup Kitchen was really just a salad bar as it was impossible to soak any baits out there before getting immediately tangled up.

It was getting late and the group started disbanding, but a few of us stayed and duked it out.  The salad slowed down and it became fishable again when Ben missed a nice shark, then rebounded with a legit Soupfin to align the stars again.  Not many sharks were caught, but at least there were a few.

It was a great time and I want to thank everyone who participated.  Only 364 days until the next “Gathering” now.