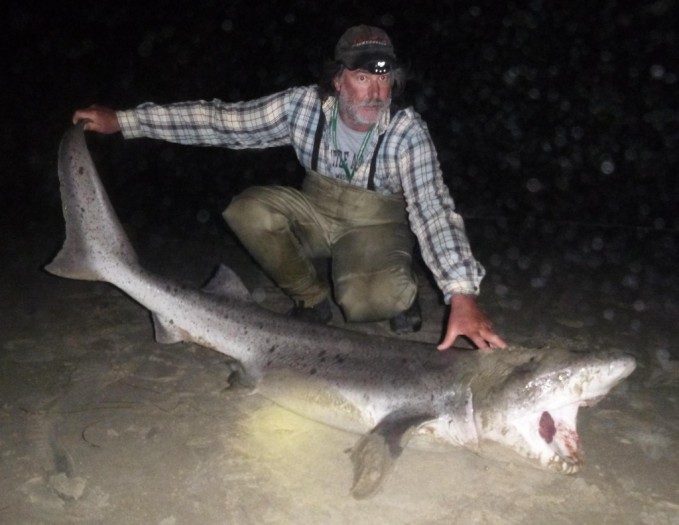 Notorynchus cepedianus…. The Sevengill Shark and the second most potential deadly surf shark of Southern California.

This week has almost been unprecedented with the number of sharks being spotted along the SoCal coast, not to mention the unfortunate encounter with a surfer earlier this week.

In any case, when light conditions are low like in the early morning or early evening there is a changing of the guard.  The humans move out of the water and the sharks fill the void where they were just at to stage for their feeding activity.  We watched a bunch of surfers surfing right where we caught our sharks last night as I’m pretty sure not a single one of them was truly aware of what lurks just below them.  It’s not random, they use the same reefs that people surf to locate their prey. 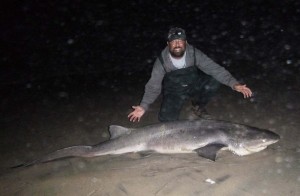 It ended up being a great surf session with Steve and myself landing a nice surf shark each.  Both sharks were quickly photographed and released after some quick measurements so they could grow up and make more babies.  This in itself is a partial reason for all the shark sightings.  Fishermen in the old days would quickly dispatch their catch into the freezer. More recently,the love and protection of sharks has grown from anglers to even everyday people who maybe only see the beach once a year.  The more protection, the more shark pups being born.  The more sharks in the water, the more prey items that need to be present as a food source.  The more adult sharks in the water, the more interactions with humans recreating in the surf.  The more interactions, the greater the odds of you becoming a possible new food source.  Quite simple if you come to think about it, so be safe and remember that sharks have no eyelids.  The higher the sun is in the sky, the less of a chance that a shark is in the shallows where the light is the brightest.  When the sun goes down however, they instinctively like all fish are literally getting ready for dinner so be safe and decrease your odds of getting bit by calling it quits before mealtime.

Be Safe, Be Smart and be sure to read about some of the recent adventures on our forum! 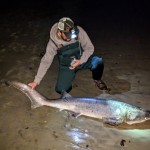